When you think of a photographer, you think of a camera, correct?  Well Scott Leggo says his most important piece of gear, for more than 10 long years, has been a pair of Raichle (now Mammut) hiking boots he originally bought from Mountain Designs in Braddon.

As a professional landscape photographer, Scott’s boots have taken him across Australia and around the world. They’ve protected him in minus 40-degree weather in northern China, plus 40-degree temperatures in the Top End, and everything in-between. They’ve saved him from a snake biting him and other nasties found in jungles and the Australian bush. They’ve helped him scramble over rocks, climb up ice, secured him as he’s stood in creeks under waterfalls, and done whatever Scott has to do to get ‘that shot’.

“The boots have become an extension of me,” says Scott, who owns a business by his own name and photographs through all seasons from the wee hours of the morning until the stars are twinkling at night. “Being a landscape photographer can sometimes be physically demanding—indeed gruelling—and it often requires a lot of patience, but that all fades away once you capture the image. Then it’s all worthwhile.”

Scott will talk about his landscape photography career at the upcoming Design Institute of Australia ACT’s 5×5 Speaker Series, being held on 26 July at the Gorman Arts Centre. The event format is simple—five design professionals speak for five minutes on a design topic of their choice, followed by an interactive question-and-answer session. Each event comes through with its promise to be inspirational and thought-provoking. This is Scott’s first appearance and one never knows; he might just bring his boots.

A passionate outdoorsman with a spirit of adventure, Scott travels extensively and always looks to immerse himself in the environment he photographs. He has received more than 100 Australian and international awards, including the coveted title of Master of Photography by the Australian Institute of Professional Photography (AIPP) in 2012. He has also won both the landscape photographer of the year and professional photographer of the year titles in the ACT. Scott’s clients include Australian corporates and large government departments wanting a touch of Australia on their walls. His work has also popped up in marketing and advertising campaigns, on websites and in a wide range of publications. “I most love it when the photos are sold as artworks,” he says, “when they take pride of place in a home or workplace, making a statement and bringing the outdoors in.” 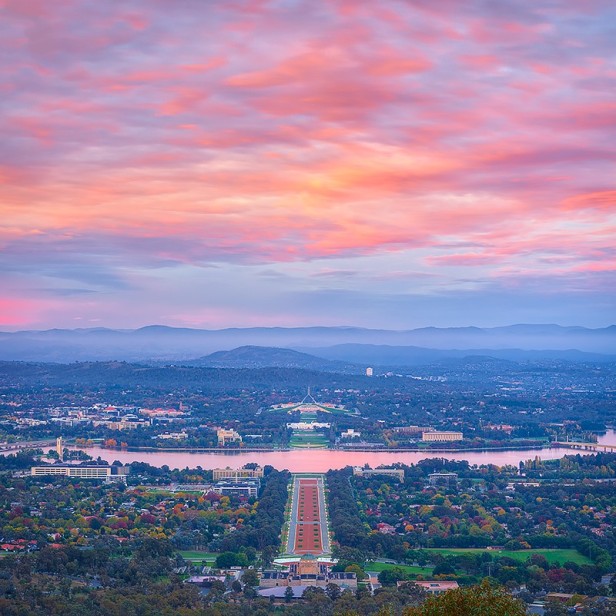 Colours of Canberra by Scott Leggo

While travelling thrills Scott, he’s equally passionate about taking photos of Canberra, his home, whether it’s sunrises in autumn, early morning fog, reflections of trees in the lake, pink skies or our many iconic cultural institutions. Today Scott’s business is run as a family affair with his wife Phillipa. They’ve joined their diverse business backgrounds to bring unique Australian landscape wall art to homes and workplaces the country over.

Scott has just returned from a trip to the Blue Mountains and is now planning to head to the snow, camping back-country to capture unique photos away from well-beaten trails. After that he’s off to Queensland for a bit of warmth.

And what about the Mammut Boots? With a tear in his eye, Scott says it’s time for them to retire. He’s looking for a new pair but couldn’t part with the old ones without snapping a photo of them for posterity.

Colin Haining—Inklab, a creative agency bring brands and people together

Legojacker, a photographer who loves playing with plastic and his iPhone7plus