What’s the most expensive piece of clothing you own? Mine is easy; the outfit I wore for my son’s wedding three years ago, but that could be considered a special occasion. Second to that is a pair of Colorado boots I bought for almost $300—mind you, they have proved exceptionally good value for money as they’ve seen me through five winters now, without signs of ageing or need of repair.

The reason I ask, is a few days ago (for want of nothing better to do) I picked up a local shopping centre magazine, but let’s not be coy—it was the Canberra Centre Culture magazine. I call it magazine as it’s not quite junk mail (though it is chock full advertising and little else) or a sale catalogue, but is in fact a forty-something page glossy, which in my mind entitles it to be a magazine. But I digress …

Amongst all the ads for the brand and boutique shops was a small article on how you could get “the look for less”, remember those words. There were two looks, and the first that caught my eye was an outfit including a Hugo Boss dress at $899. $899! You might as well say $900 as you can’t do much with your dollar change.

Coincidentally, a colleague of mine was previously the Marketing Manager of this particular centre, and she commented that Hugo Boss was a very slow moving retailer and that’s why they pushed it in the mag. Well, I’m no expert, but here’s a little tip Hugo; maybe if you dropped your prices a tad—just a tad mind—you might actually become a faster mover.

Perhaps I associate with misers, but I don’t know anyone who would pay $900 for a dress. Even in this up-market, highly-paid, secure employment city (population around 350,000) I think you could probably count on both hands the number of people who would hand over that amount of money for one item of clothing, and most of them would probably reside in embassies or the Parliamentary Triangle.

Next up in the look was a pair of Wittner shoes—a mere snip at $189. So already you’re over a grand for your new look. Include the bag, a jacket, Hermes scarf, and various bits and bobs of jewellery and you’ve calmly shelled out close to $2,000 for your sensational new Spring look.

I could spend two weeks in a beach house on the Cook Islands for $2,000, and if I stayed across the road from the beach the $2,000 would include the airfare. I could buy a cheap run-around second car for $2,000. I could go on an eight day cruise around the Pacific for $2,000.

Shopping Centre Fashionista? Not at those prices …

Penang is an island. I never knew that. After a one hour flight from Kuala Lumpur we arrive at 12.30am, and Penang airport is about an hour out of George Town where we will spend our first three days. We have been travelling since 5am the previous day and pay no attention to anything at the hotel except the bed where we sleep the sleep of the exhausted, until woken by the call to prayer from the Mosque at 5.30am.

We finally wake properly at 7.30 and after grappling with the hot water contraption in the bathroom (excuse me, but frankly I can’t see the problem with simple taps…) we eventually make it down to breakfast around 8.45. The food is varied—an eclectic mix of east and west—neither of which seem particularly appetising. You settle for scrambled eggs on toast (with one of the little sachets of Vegemite that travels everywhere with you), and I stick with fruit and yoghurt which somehow seems better than anything else on offer.

The hotel, appropriately named Hotel Sentral, is smack in the middle of town and within walking distance of the afore-mentioned Mosque, the Komtar Centre (more about that later), the bus station, various restaurants and cafés, and another smaller shopping centre complete with supermarket. Our aim today is to explore the town.

George Town is colourful and bustling. In 1786 the British East India Company leased the town from the Sultan of Kedah and consequently its architecture is a mixture of Malay and Victorian Britain. Wandering the back streets of the town we stumble across lantern makers, beautiful embroidered batik, and stunning beaded tops and bags. Still exhausted—from the combination of travel and walking in the heat—we wind our way back to the hotel and settle for a quiet dinner and an early night. Tomorrow we hit the Komtar Centre. 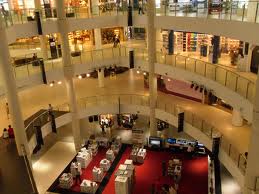 Komtar is a huge department store surrounded by gardens, cafés and coffee shops. The Centre itself is split into three distinct shopping centres. The first contains local market type stuff including souvenirs, gifts, Malaysian apparel (for men and women), and local shops and food outlets. The second is exclusively IT and phones—you name it, they’ve got it. And the third is—finally, western fashion, shoes, accessories, hairdressers, and western eateries with the Colonel’s chicken, and the Golden Arches taking pride of place.

Being a shoeaholic, I make a beeline for the nearest shoe shop, and finding at least 20 pairs I could conceivably purchase, I realise I should narrow it down a bit otherwise I’ll have to buy another suitcase just to get the shoes home. 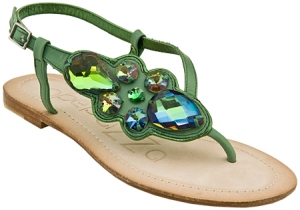 Some hours later, and armed with my boxes of new shoes, we wander back to our hotel and pass a rather nice looking outdoor restaurant which we earmark for dinner—a spicy Nasi Lemak sounds just the thing. 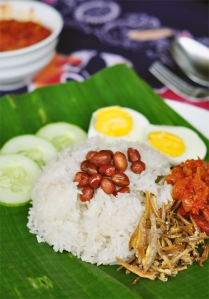 The following morning the Imam wakes us again at 5.30, and again the breakfast is fairly ordinary, the only difference from yesterday is the soft boiled egg served in a dish of rice.

Today we are taking the ferry to Butterworth, the main town on the mainland of Pulau Penang. A former air-force base (one of my work colleagues whose father was in the RAAF, was born in Butterworth), it is smaller and more industrial than George Town, and unfortunately lacks the atmosphere and local culture of the latter. The ferry from George Town to Butterworth is free, but costs RM1.50 to return—that’s about 50 cents. The ferry ride provides a cooling breeze from 33 degree humidity of George Town, and the view of the harbour on the return trip is well worth the 50 cents.

Penang Harbour_Komtar Centre is the tall tower on the left.

Dinner tonight is at an open air seafood restaurant, and the spicy seafood curry warms us against the drop in temperature—a storm is coming, and we feel the first drops of rain as we walk back to our hotel. But this does not worry us; as tomorrow we are off to the beach resort of Batu Feringghi—awesome!