When she was little, Megan Cannings fell in love with fashion. She dreamed of Princess Diana and how stylish she always looked. She dreamed of designing feminine and elegant pieces that would be worn on runways by models.

Megan’s dreams have come true. She’s participated in many fashion events in the past few years showcasing ‘Megan Cannings Designs’ in places like Sydney, Brisbane and Townsville. And she’s back in Canberra on 19 October to present her latest collection at FASHFEST.

Megan is no ordinary designer. She’s been sewing since she was in sixth grade but struggles to read patterns and openly admits she failed home economics. That hasn’t stopped her from creating stunning pieces, including intricate gowns that float across the catwalk.

‘My inspiration behind this collection was spring in the country, which is always so beautiful and fresh,’ says Megan. ‘I’ve always adored flowers and so have designed these gowns in different styles, fabrics and colours to look like a spring bouquet.’

This is Megan’s third appearance at FASHFEST. Social media snaps of her debut show, taken by the event’s photography team, were spotted by organisers of Milan’s mega fashion event. At first, Megan couldn’t believe the invitation was genuine. When it sunk in she jumped for joy. The timing wasn’t right, but the invitation itself was a real boost. Megan is hoping to make it to Milan one day.

Megan pinched herself again when the invitation came to showcase at New York Fashion Week. She has just returned from the Big Apple and will be putting some of her pieces from that show into FASHFEST 2018. Next up, the designer is keeping her eye on Paris Fashion Week. 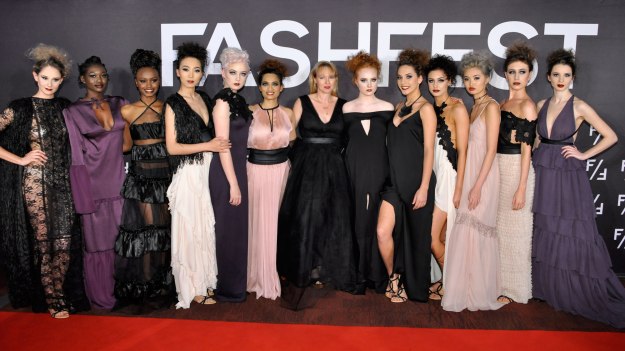 At FASHFEST, being held at the National Gallery of Australia, Megan will kick off the evening—the first of three designers. Models will use the towering escalators in the foyer of the NGA as part of the runway.

‘I want my gowns to be something that women desire to wear,’ says Megan. ‘I want them to smile when they see them and be delighted when wearing them.’

Full on manufacturing is the next business priority on Megan’s agenda. And she’s working with a fashion boutique on the Gold Coast getting ready to stock some pieces there.

On 19 October, Megan’s collection will be followed by Charly Thorn’s evening luxe collection and then magnificent pieces by Hajar Gala Couture. 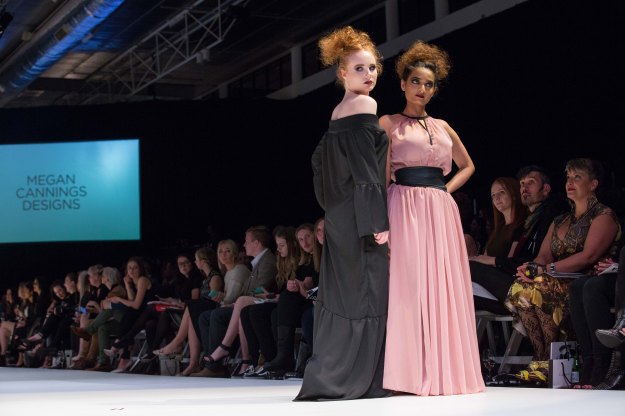 Snapped at FASHFEST 2016 by Wearefound.

This year, FASHFEST is changing it up, hosting a series of rolling shows in cultural institutions and buildings of historic significance. On 19 October, the same show will repeat twice. Other shows will be held in December and February and FASHFEST may even pop up in-between.

Clint Hutchinson, who co-founded the event with his wife Andrea, says the event will always evolve to hold interest. ‘Our strategy has always been to change it up every couple of years, partly to stretch ourselves in the creative space and partly to celebrate what makes Canberra such a special place,’ says Clint.