For some, coal is a dirty word. For others, it’s an incredibly refined ancient rock that can be used to create stunning pieces of jewellery.

Sophia Emmett hand makes jewellery out of chunks of pitch black coal she finds while walking the beaches of Newcastle. She does so out of Workshop 85, which she formed in 2012. “Exploitation as a fossil fuel has given coal a bad name,” says Sophia. “Appreciating coal as a finite and precious mineral is a different perspective and my pieces highlight its raw and natural beauty.”

Sophia’s professional artistic career began with the world of glass, and has included an artist-in-residency program at the Canberra School of Art, studies overseas, and many opportunities to work with master glass blowers. For years Sophia worked with black glass and wasn’t at all surprised that she was naturally drawn to the intense black of coal once she made the ‘sea change’ from Canberra to Newcastle.

… to this – coal stud ear-rings by Sophia Emmett

Dealing with coal is a messy business; it’s oily and dirty. Sophia must also be careful that she doesn’t breathe in any coal dust. She uses a respirator, lots of water to control the dust and works in batches of about three days to cope with the realities of dealing with the raw material. “It takes me ages to scrub down so there’s no point in working with coal for just an hour or two, even though what I find on the beach has been weathered and worn in the water and can be quite smooth to begin with,” says Sophia. And the first step back in Workshop 85 is sorting the coal into sizes.

Next is cutting the coal with diamond tools, which have high grinding efficiency but low grinding force, meaning more pieces survive the process. “I’m getting to the stage where I can pick up a chunk of coal and tell if it will survive,” says Sophia. “Coal is not a uniform material. Some pieces have fractures and I know they won’t work. I have to be careful when drilling since even at the last stage a piece can crack. 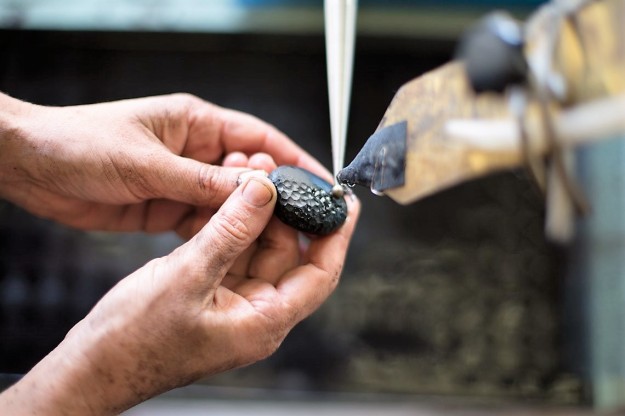 “The piece of coal I find dictates the form and shape of what I make. No two pieces are the same, not even two earrings that form a pair,” says the artist. “They aren’t identical. There are so many variables I can’t control.”

The last step sees Sophia carefully polishing each piece of jewellery. The length of time required depends on the type of coal, with some pieces harder than others. Sophia uses reclaimed silver and stainless silver wire to form pieces, and her range includes cufflinks, pins, hook earrings, stud earrings and necklaces.

Karen Lee, who owns Assemblage Project in the Ori Building, Braddon, was instantly attracted to Sophia’s work and now stocks a selection of her women’s jewellery. “I liked the story behind it,” says Karen. “When people see it in the shop and it clicks that it’s coal, they touch it and then look at their hands wondering if there will be dust on their fingers. They’re fascinated.”

The coal jewellery also works well with the aesthetics of the fashion designers who sell out of Assemblage Project, including Karen’s own label—Karen Lee. “It’s not just the colour that works well, since black goes with everything,” says Karen. “It’s the design. It’s unique, well made and I love its simplicity.”