How many arguments does this simplest of desserts create? Fruit or no fruit? Jelly or no jelly? What’s your take on the most popular Christmas dessert … The Trifle!

I grew up in the north of England and our Christmas table always included a traditional Olde English Trifle for dessert; there was pudding as well of course, with sixpences wrapped in foil, but the main event was the trifle. It was sweet and smooth and ever so slightly tipsy from the sherry that my mother poured over the cake. The trifle was usually made the previous day so the sherry could soak into the cake and fruit, and the custard (which was also home-made) could set. The cream and decoration, or fruit topping, was added immediately before serving. And there was never, ever, any jelly in it! 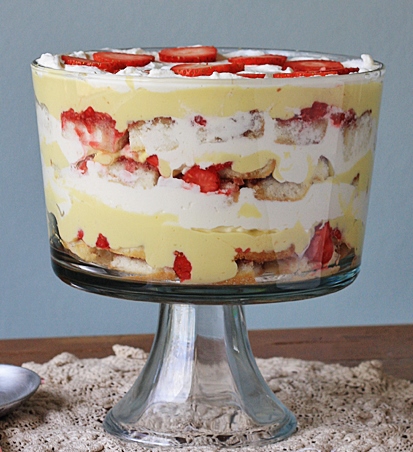 It’s a bone of a contention that jelly inclusion. In the words of George W Bush ‘you’re either for it or agin it’. The original trifle first appeared in 1596 and was basically a thick cream flavoured with sugar, ginger and rosewater and evolved from a dessert called ‘fool or foole’. In 1656, eggs were added and the custard was poured over alcohol soaked bread. The earliest known recipe to include jelly was around 1747.

There are lots of articles and arguments as to whether a true English trifle should include jelly, and even our celeb chefs of today disagree with current fave celeb Jamie Oliver’s special trifle including it, while the great doyen of traditional English cooking, Delia Smith, wouldn’t touch it with a barge pole. Of course, the exclusion of jelly also makes the dessert suitable for vegetarians—unless you’re making the jelly from scratch with agar agar and not just opening a packet of jelly mix.

Either way, the simple trifle is easy to make, looks fab, and is very versatile. You can have one large bowl of trifle where everyone digs in, or you can make individual ones allowing for personal tastes. My mum never used a recipe so I don’t have a traditional one to pass on, but I do however have a really easy-peasy basic trifle that you can play around with and stun your guests!

1 ‘slug’ of alcohol (depending on whether you’re after a tipsy trifle, a drunk trifle, or a totally plastered trifle)—omit the alcohol if you’re serving children; or make them separate ones

Place the Swiss roll pieces in the bottom of the bowl (or glasses), and pour over the alcohol; leave for a couple of hours so the cake absorbs the liquid. Add the fruit and pour the custard over the top. Cover and leave in the fridge overnight.

Whip the double cream with an electric whisk until firm but still soft, and spread over the custard. Decorate with sprinkles, choc bits, fruit etc, and serve immediately.

Cake: you can substitute the Swiss jam roll for a Swiss chocolate roll, or plain sponge fingers

Alcohol: traditionally it’s a Madeira wine, but if using sherry you’re probably best with a light, dry Fino, or choose something to match the fruit, or the cake. For example, if you use a chocolate roll you can match it with a chocolate or coffee liqueur like Crème de Cacao or Tia Maria. If using berry fruits you can select a berry liqueur such as a Daiquiri; with citrus fruits you can select a Cointreau or Grand Marnier.

3 thoughts on “A Mere Christmas Trifle!”