Having fun on the Merry-go-Round

If you grew up in Canberra the Civic Merry-go-Round (or Carousel) is an icon. Even if you didn’t grow up here you know what and where it is. It’s carried thousands of children round and round while parents wait on the sideline; it’s been restored and repainted a number of times, and on 13 March celebrated 40 years of putting a smile on the faces of Canberra kids. But its life started long before that, and this year the merry-go-round also celebrates 100 years of operation.

The merry-go-round started its life in 1914 at the St Kilda Esplanade in Melbourne. Designed and built by Herbert Thomson from Armadale, Victoria, for German showman Anton Weniger, the organ and fifty-two hand-carved wooden horses and two elephants were imported from Germany, and the upright twisted poles came from Scotland. At the time it was the largest and most modern merry-go-round in Australia and today is second only to the merry-go-round in Melbourne’s Luna Park.

In 1957 it became part of McDonald’s Carnival Amusements, but with the decline of the St Kilda Foreshore it was left to deteriorate and in 1973 the area on which it sat was scheduled for demolition with everything on it up for auction. The then Department of the Capital Territory purchased the merry-go-round for $40,000 for the people of Canberra, and the organ, music and the merry-go-round itself were restored by a number of local volunteer groups including the Carousel Organ Restoration Group (CORG) who not only restored the 69 pipe organ, but also remade organ parts. The organ is no longer with the merry-go-round but due to the great work of the CORG it’s still in working order.

Others involved in its restoration included the ANU Research School of Physical Sciences who restored the steam engine—though the merry-go-round is now operated by an electric motor. Staff from the Australian War Memorial and the then Canberra College of Advanced Education (now UC) worked on interior panels and artwork; Mrs Wendy Coley painted the elephants, with the Master Painters Association painting many of the horses and exterior panels, and the Canberra Gem Society restored the mirrors. And for those of you really want to reminisce, J B Young’s department store provided a cash donation and materials.

The beautifully restored and refitted merry-go-round began operating in its current location in Petrie Plaza during Canberra Day celebrations on 13 March 1974, and many local celebrities and politicians joined the 7,000 people who turned up for the opening and enjoyed free rides for the day.   The horses are four abreast in 14 rows—and most of them have names including Phar Lap—and of the two hand-carved elephant carriages, the big white one is called Queenie. 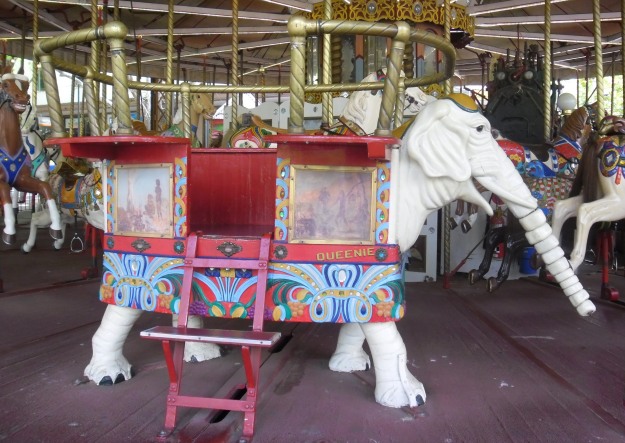 The merry-go-round holds fond memories for the Canberra community. Whether you rode on it as a child, or watched as your children laughed and waved their way around—the older ones on a horse and the little ones in a carriage—it captured the hearts of the people, and will hopefully continue to work its magic for many years to come. 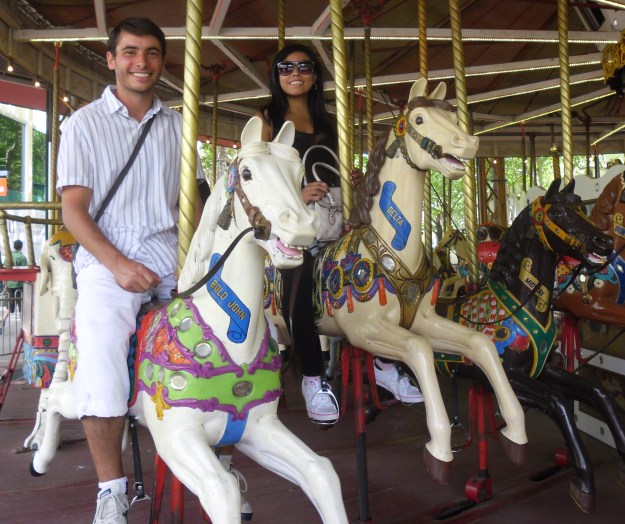 *The Magic Roundabout is a childrens television program created created in 1963 by Serge Danot, and originally screened by ORTF (French TV) from 1964 – 1971. Produced by the BBC (UK), the English language version—first screened in 1964—was written and narrated by Eric Thompson, and after his death, by actor Nigel Planer.